“The things Angela sees as negative, are almost a fuel for Kruella to present herself the way she does and to work on the ideas and concepts she works on, and the good things from Kruella bring a lot of magic, realizations and wisdom into Angela’s life.” 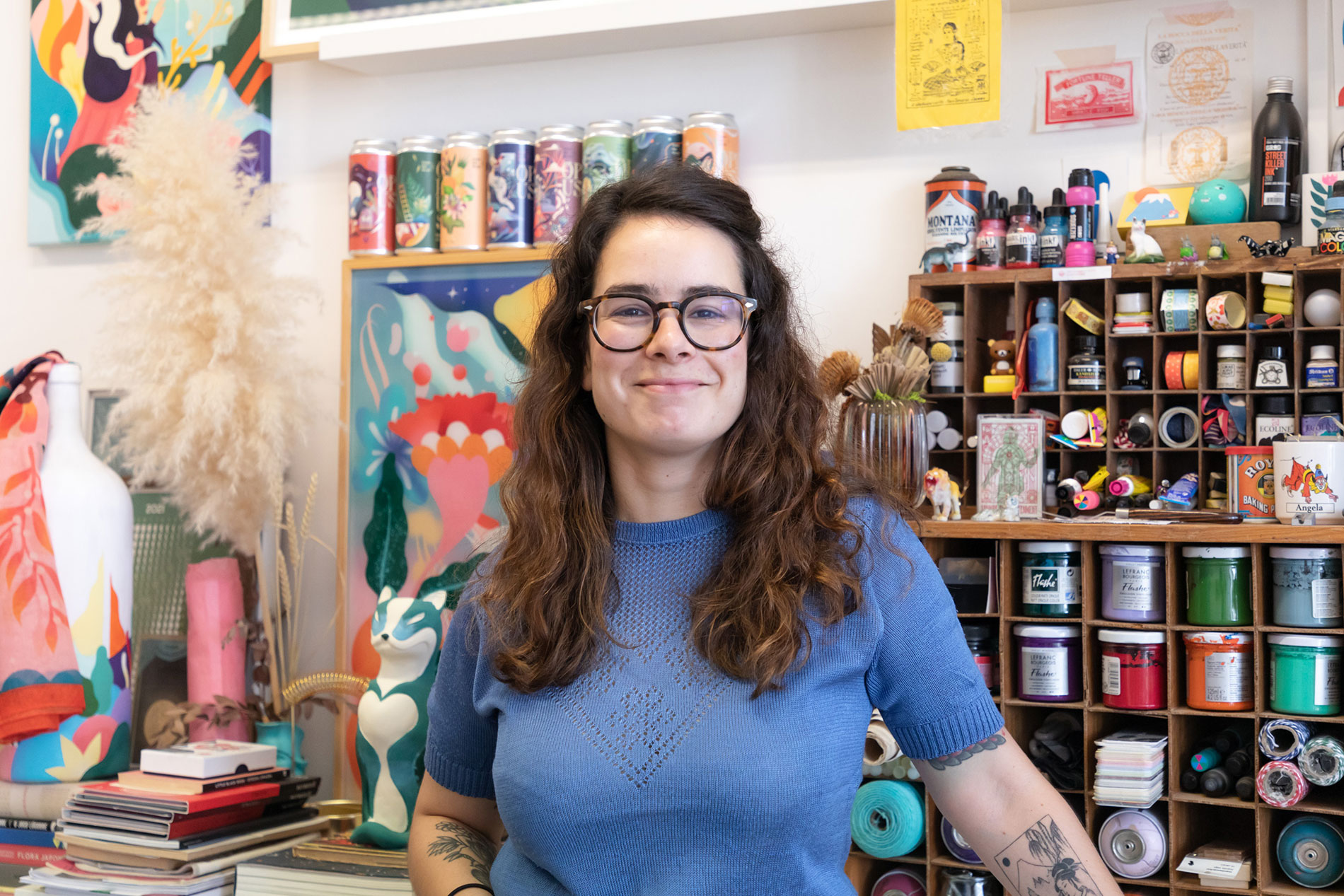 Kruella, did you always know what you wanted to do as an adult?

No, I wanted many things. As a child, I imagined myself designing dresses for runway shows, because my mother was a seamstress and I thought we could be a team, and because I used to look at fashion magazines from the 90s that she had at home. As a teenager I wanted to be an architect and used to drew blueprints of my dream house. Going to college was a drama because I didn’t know what I wanted to do and I went to Lisbon because my friends from Tondela all went there and I ended up going there a little bit because of it, rather than consciously deciding on a course.

Mystery and magic are constantly present in your work. Are you aware of the origin and reasons for this interest of yours?

I was born on a stormy Halloween night, in the middle of a village near Tondela. The interior of Portugal is very strong in mysteries, legends of witchcraft, myths, superstitions, but I also think that the fact that I spent a lot of time alone as a child, playing in a very rural environment, surrounded by nature and animals, fed my imagination a lot.  And the things I loved most – cartoons I watched or stories I heard – had those themes and they were my escape and the way I traveled in my own mind.

And do you have any rituals of your own when you start a project?

I tend to get a little anxious the day before I start a project and I always sleep badly because I go to bed already thinking about work and thinking of all the ways it could go wrong. I like to organize my desk because if everything is disorganized and full of junk my brain goes crazy, and I really accumulate a lot of junk, but I need everything to be in the right place so I can concentrate. 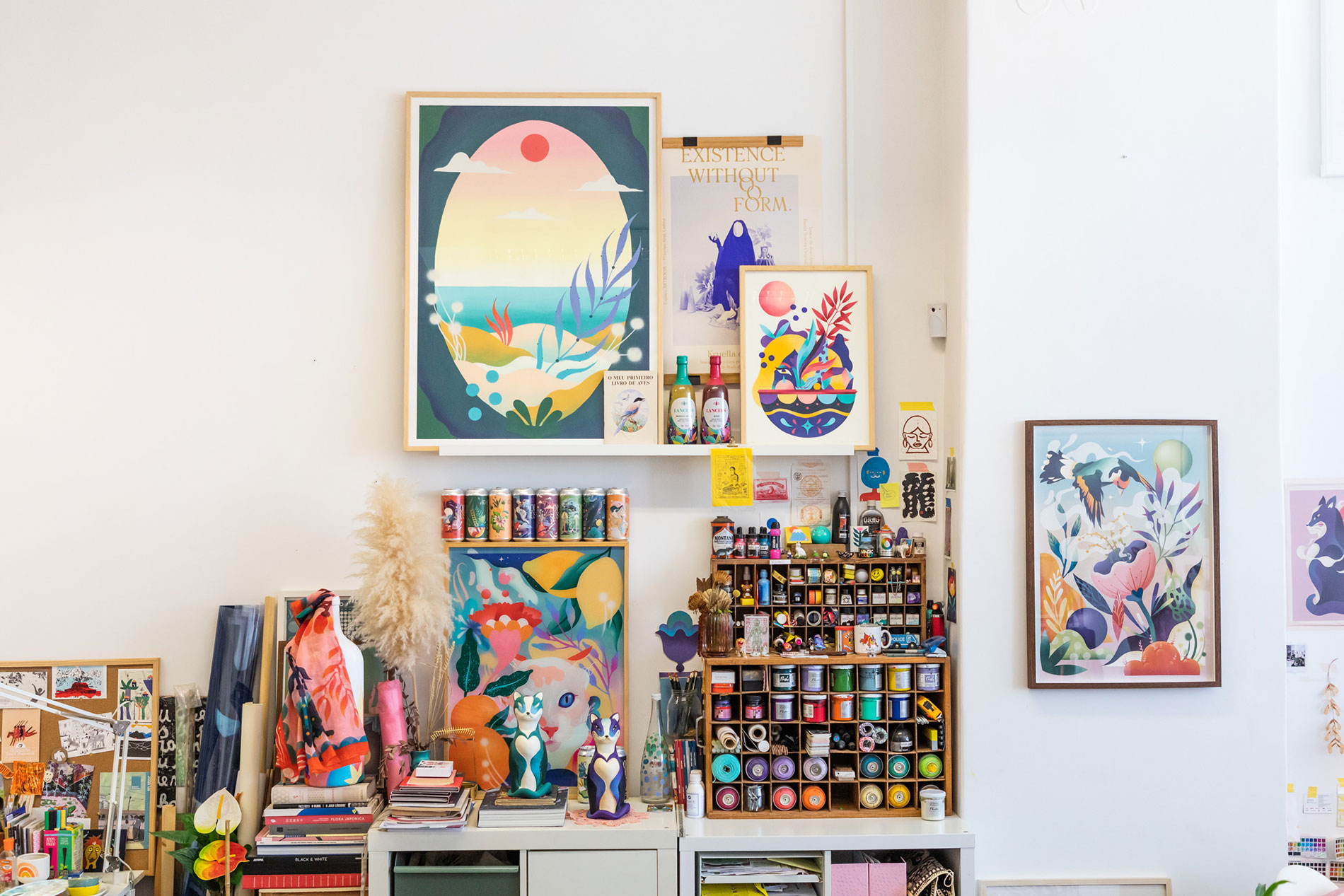 Was using a heteronym to represent you as an artist, Kruella D’Enfer, a natural choice, or did it happen because of a specific moment in your career?

It was natural because I began to realize that I could do something in the field of illustration when I started meeting other artists. Then, as I had contact with the world of graffiti, which consequently taught me how to spray paint and gave me a sense of larger scales, I had to create my own tag and it came from there.

And by the way, what is the origin of the heteronym?

Basically, I googled villain names and of course, within the Disney universe, I had many options. Cruella from 101 Dalmatians, was the one that sounded good to me and fit perfectly with my shy personality, I created a tough cover for those who didn’t know me (laughs) and then I adapted it to Kruella because I realized it works better as a tag, as a set of letters, as a signature and gave it a more personal touch. Kruella d’Enfer makes it more charming and complete.

How much of Ângela Ferreira is Kruella D’ Enfer?

I always took refuge in Kruella for the creation of this idea of Freedom, of doing what I want, of getting into a strong, easy-going, positive, mysterious, funny character.
Angela (I write and sign without an accent, go ahead and judge me.) has an introverted and closed side and has many unresolved things, which I don’t love, but have been learning to accept and mostly working on it with therapy… and eventually, without realizing it, Angela and Kruella started to merge naturally. The things Angela sees as negative, are almost a fuel for Kruella to present herself the way she does and to work on the ideas and concepts she works on, and the good things from Kruella bring a lot of magic, realizations and wisdom into Angela’s life. 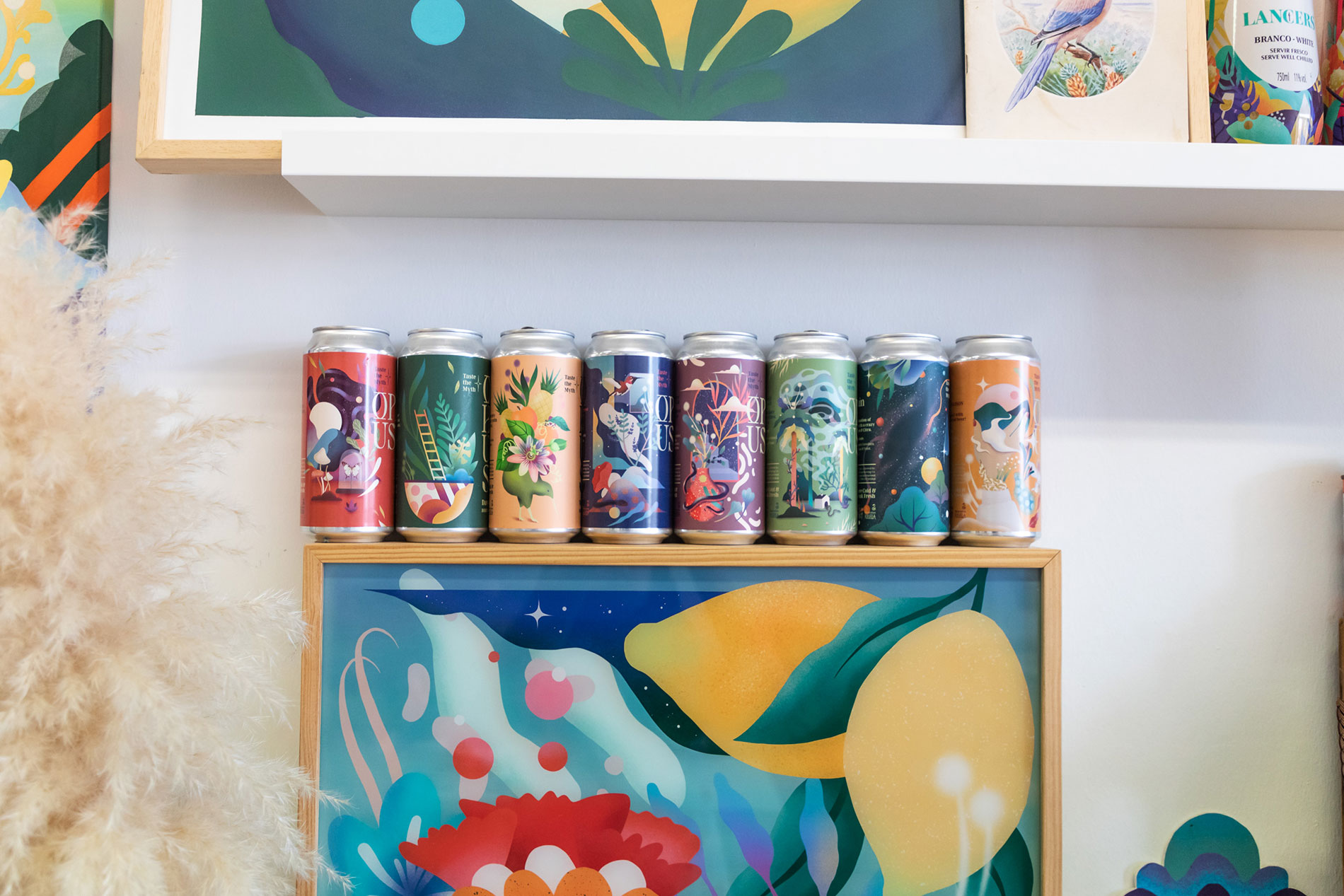 Kruella, you have your work beyond the Portuguese borders, and you don’t have an agent representing your art. There is all this behind-the-scenes work that implies persistence and career management. Do you like this challenge?

I like it a lot. I am very proud of this freedom that I am conquering and of the management knowledge that was inevitable to learn. It is sometimes exhausting to do everything alone, from looking for clients, managing the website, online store, social networks, sending mail on time, answering emails, making production, knowing how to disconnect and rest, looking for inspiration, going to exhibitions, preparing exhibitions, making a good balance between commercial work and personal work, but everything can be achieved.

Are you aware that your art positively impacts other artists, illustrators, and designers?

I am aware of that because I am told so. I like to be in contact with other artists and I like to give them feedback when I really like what they are doing. It’s also nice to feel that feedback in relation to what I do, especially from those who I really admire the work of.

Is there any kind of project, service or brand that you would like to work on artistically?

I would love to make a sculpture for Burning Man for example, if we’re into thinking big. Or, I don’t know, … designing and building a whole set for a fashion show for a luxury brand. Or paint an airplane.

Do you have a favorite medium, and, on the other hand, is there one that you are curious to work with?

I really like the spray, mixing the colors, the texture, the smell, the shape of the can, the colors…I love it and always will. I would love to venture out and buy an airbrush because of the similarity to the texture of spray, but softer and do things like that on canvas. I’ll see if I invest in one of those things. 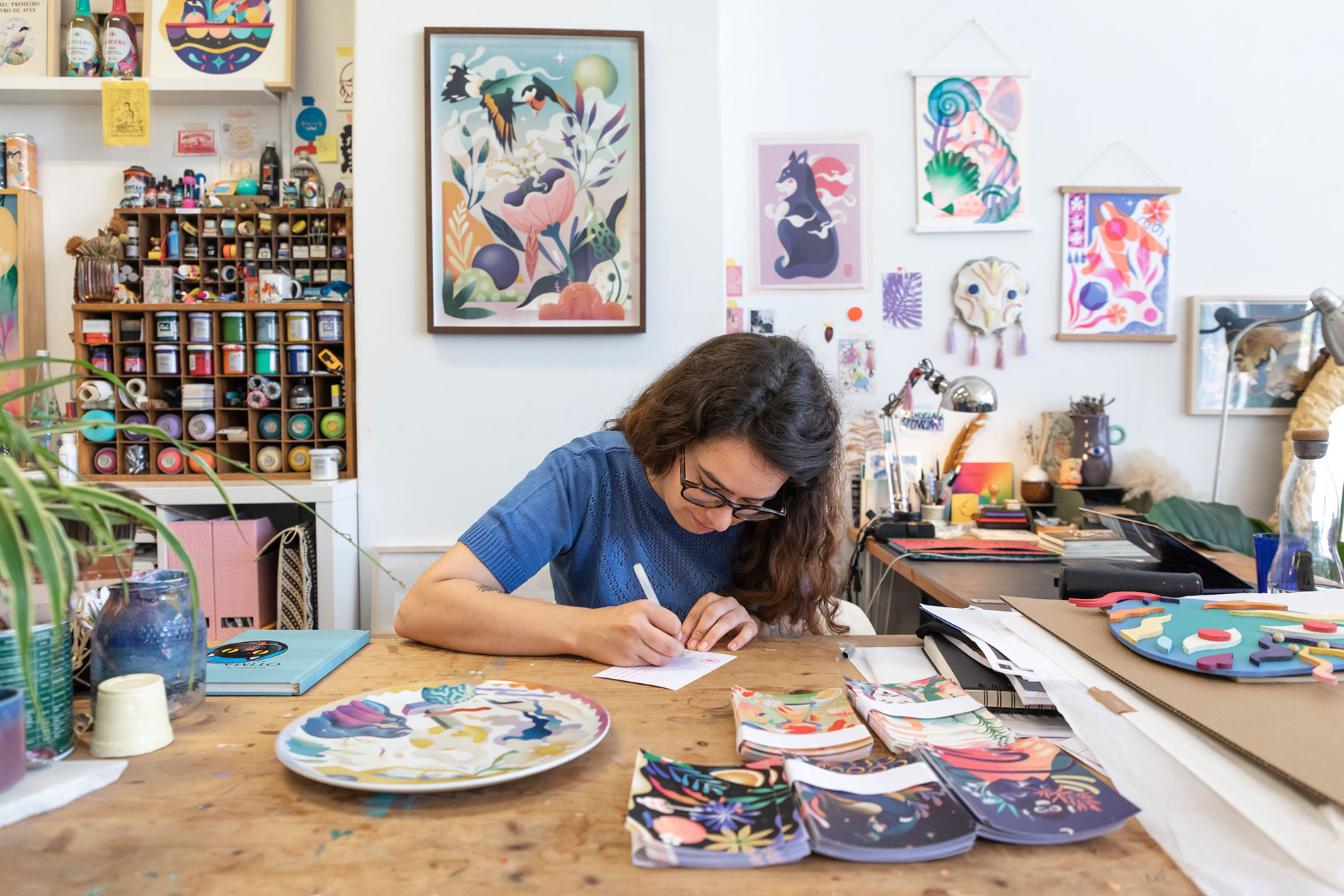 A curiosity, what did Lewis Hamilton tell you when you crossed paths in Formula 1 in Portimão, 2021?

The curiosity is more in what I said to him. He asked me if I did that huge drawing that was on the podium right there behind us (yes I was on the podium with him), I said yes, and he complimented me. Then I told him I did it in 24 hours and he was surprised, and I said with the biggest nerve in the world: “Yes, I am as fast as you man!”.
After that our interaction was in the ladies room because he got mistaken and I almost had a heart attack.

Another curiosity, have you ever worked the black and white?

Yes. I did a solo exhibition in Switzerland, called Mixed Feelings, and I divided the gallery in half and on one side there were only mega colored works, I even painted the wall where these works were with colored shapes too, and on the other side there were only black and white works, with a background also with black shapes under a plain background, to create this duality.

I have phases where I like to draw more monochromatic things and work on shadows and tones. Next year I would like to do a series of works with this technique and think about a new solo exhibition.

Photographies by Inês Ventura, at the artist’s atelier, Pandemónio, Lisboa.
9th May 2022.

Portuguese visual artist and illustrator Kruella d’Enfer, Ângela Ferreira, has been delighting us with her enchanted visual world, evoking a deep sense of wonder with the fantastical, benevolent creatures that inhabit its dark and mysterious corners, be they mystical wolves or magical foxes. At ease painting both large-scale murals and intimist works on paper and canvas, her use of contrasting colours and geometric shapes brings age-old legends and myths to life, composing fantastic stories with a universal appeal. She has been exhibiting her work in solo and collective shows since 2010.

Born in Tondela, North of Portugal, in 1988.
Ângela studied at ESAD – School of Arts and Design, Caldas da Rainha – but she dropped out college to pursue her art career, totally self-taught.
Loves to travel, food and her 3 cats. 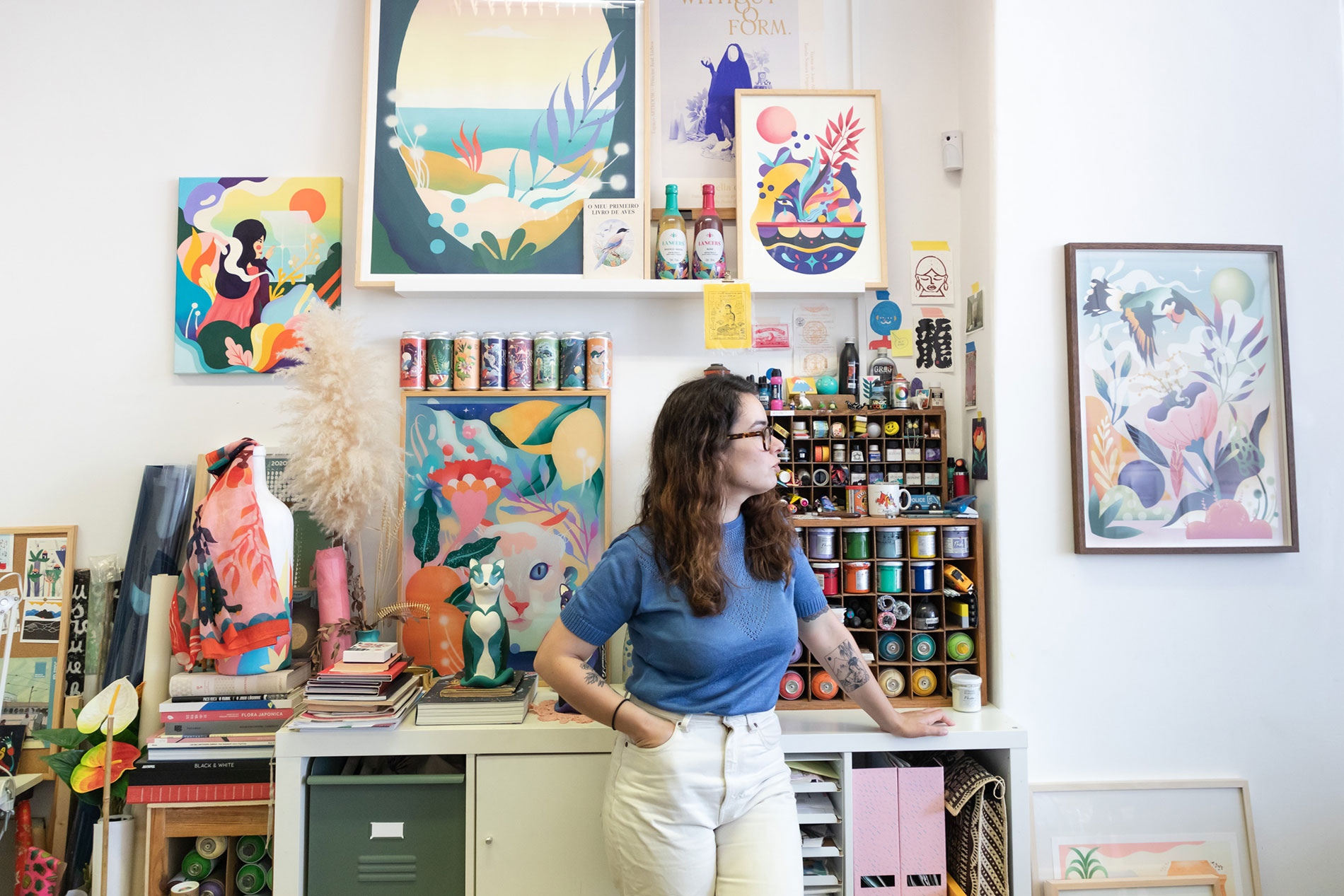